The speed of Snapchat’s rise within the social media world is directly proportional to its gains. While the social network itself still has to prove its value, the challenge is for F&B players to harness its popularity without looking like the awkward grandfather, and utilize this guide to Snapchat marketing for beginners now.

In fact, if the concept in marketing which says that companies should be where prospects are is something to follow, then Snapchat is absolutely a place to be. According to the platform’s creator, snaps posted can attract thousands of users per day.

“If you’re running a business in 2016, you need to be thinking about Snapchat.” — Gary Vaynerchuk

With such a huge potential audience, it’s no surprise that companies around the world are eager to be present on the network, even though the notion of marketing is relatively new to the image-messaging app. In fact, the first paid-ad appeared only at the beginning of 2015 and was a trailer for the horror movie, Ouija.

Before dipping into the world of Snapchat marketing, let’s see how it works in practical terms.

How does Snapchat work?

Everyone talks about Snapchat, but few know how it works. Snapchat is the new social phenomenon that is spreading amongst youngsters. Its success has lead Facebook to try to buy it for 3 billion dollars numerous times, and so far without success.

Through the app users send more than 400 million photos daily (more than Facebook), moving it up the table of the most-used apps worldwide since it began in September 2011.

Basically, Snapchat works similar to other instant messaging apps, allowing you to add contacts and send messages in the form of photos or videos. The main difference is that you select the time that the recipient can view the message (from 1 to 10 seconds) before it self-destructs.

That is, you send your photo, edit it if you want (you can add text or drawings) and send to whoever you want by specifying the time for which they can read it. After the user is notified that they have received a message, they can read it for the time you set.

The structure of Snapchat

Snaps: The self-destructing feature on which the app was developed, can be photos and videos.

Chat: Each message lasts a few seconds/minutes before self-destructing.

Stories: Companies can sponsor and promote themselves to users who don’t already know them through live stories.

Discover: New articles intermixed with videos from newspapers and magazines like the BBC and People.

Lenses: Filters of any kind on photos or videos.

Why do people use it?

Within Snapchat you can take a picture and share it without thinking twice, as with it being temporary there is no obsession with perfection, which happens with other apps such as Instagram.

Snapchat is mainly used to portray aspects of everyday life that are not relevant enough to stay anywhere permanently. We are overloaded with pressure to show the perfect version of ourselves on social networks and present exactly the image we want to communicate, and this ends up leaving a hole to communicate all that in everyday life is forbidden.

Not everything you do throughout the day needs to have a place in a museum; everyone is entitled to do “ugly” things occasionally. That awful cake you prepared, a pimple on your face, and the pajamas with bears are all things that you would never publish on a permanent network. Instead, in an ephemeral network we don’t care about sharing “shameful” posts.

The numbers being produced by the app, along with ongoing trends seeing a peak in users in the 24- to 45-year-old age, make it an inviting place for companies to share their stories.

Universal was the first to use the ‘lenses’ in a campaign to advertise The Peanuts Movie. People could tap on an icon, which overlaid pictures of Peanuts characters with the theme song playing in the background.

Universal’s campaign was a valid use of Snapchat’s features, which go hand-in-hand with the concept that to effectively promote your business, you must use the app in the same way people do. Although the campaign was successful, the costs were heavy. The Financial Times reported that Universal paid around $700,000 for one day, which may be the reason why other brands haven’t been quick to do the same.

Ad costs have been heavily criticized since Snapchat opened its doors to advertisement.

However, if the campaign is set properly the large amount spent can be a substantial investment. At the 2015 Super Bowl, Gatorade, in the wake of Universal, created a sponsored campaign, where people could take a snap in which an enormous Gatorade bucket is thrown over their head, as is tradition with the winning squad’s coach.

According to Gatorade, the campaign achieved over 100 million views.

5 ways to integrate Snapchat into your restaurant marketing strategy

The best use of Snapchat from a marketing viewpoint is for restaurants to spread their content in the same creative way that its users do.

If you as a restaurant manager are able to imitate users’ behavior and exploit the social channel to also share stories about your business through those hit-and-run posts, you will attract into your restaurant more customers than you can imagine.

Let’s see 5 ways to do Snapchat marketing for restaurants.

Act now and don’t waste precious time! Learn from this free guide all the strategies and secrets needed to get thousands of customers through Snapchat. –       How you can promote your personal branding and your business

–       Receive the best tips, strategies and updates via email

The Snapchat Stories feature allows you to create stories or conversations, made up of content that remains active for only 24 hours, and then disappears forever. It is in this way that the application has found its success.

The lack of filters and editing features make Snapchat extremely useful for informal and authentic storytelling. The “real” messages are those which in the end really involve the attention and are most appreciated by users.

Unlike your website where you need to take professional food pictures, on Snapchat you can afford to churn out fast shoots without caring about reaching perfection. Be sure that the conveyed authenticity will be appreciated by users. Snapchat allows the creation and management of custom coupons and promotions with a set limit time. The element of strength of this strategy lies in the fact that in the short time users can access offers you’ve made available.

In this way you can stimulate the curiosity of the user by inviting them, for example, to visit your restaurant within a short period of time using the “limited edition” promotion they have.

By recognizing the limitations of these deals and coupons, users will then have an incentive to stay up to date with the restaurant’s account. In addition, with the “self-destruct” function of content, companies no longer need to worry about expiration dates for their offers. Since videos and photos exist only for a few seconds, you can use Snapchat as an ideal platform for small previews of a new dish to be marketed; it has the opportunity to engage consumers with anticipations of new chef creations.

The app becomes a great way to ensure visibility and sales once the dish is on the menu. #4 Snapchat and promotion “behind the scenes”

Although they disappear after a few seconds, the Snapchat video formats allow you to have a highly authentic impact on the final potential customer.

In fact, creating targeted messages or videos for customers who would like to “take a look” for example at the production process of certain dish becomes a double-value-added weapon. It’s all about providing valuable content from “behind the scenes” with a high perceived value. 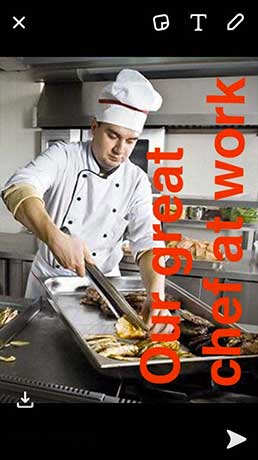 Like the other social channels such as Instagram, influencers on Snapchat can spread your message and restaurant awareness. By involving influencers, you can extend your message to a larger number of prospects that would other be difficult to reach through old media.

Also, influencers can produce killer video content that can further enhance your restaurant’s voice and identity.

As you already know, there is always something to learn from the greats. The following are 3 examples from those who know how to do marketing.

Taco Bell, the American fast-food giant, has set a strategy of Snapchat that has had much success among the young. The content they have published is addressed directly to the target audience and is unique in its kind. They involved internet stars in campaigns, used artwork and overlaid text in the images.

Here’s an example of their Valentine’s Day campaign. The company put in the Snapchat Story section pictures to be downloaded, edited and sent via private message to partners.

To promote its new loyalty card, Starbucks created a sponsored lens. The campaign lasted a day and cost $350.00. Although it may sound like a lot of money for one day, I assure you that compared to the benefits that is nothing.

Hey @Starbucks! I ❤️ your activation on @Snapchat! pic.twitter.com/bsQBq8rLLy Admittedly, for certain companies Snapchat isn’t the right route as their customers are nowhere to be seen on this network – but for restaurants, especially those targeting young prospects, this is where it’s at.

You’d be foolish not to get involved!

Download the free Snapchat marketing guide and start to grow your audience today.