Are you thinking of creating a Twitter account for your restaurant? Do you want to know how to get customers on this social platform? Here is a guide to engaging prospects on Twitter and the 20 best online tools to make the most of it.

Twitter is a free social networking micro-blogging web platform popular in many countries around the world. It stakes everything on 140-character real-time messages so as to be defined as “volatile” communication. That’s the reason behind their name and logo.

Being a social network, the user’s goal is to build a network of contacts that in some way may be interested in what they write. These contacts are called Followers, and are those who follow our Tweets (the messages sent on Twitter). And you, as a user, will be interested in following other people from whom you want to read updates and tweets that will become your Following.

Twitter was the platform that introduced the hashtag concept, which is the hash symbol (#) that precedes a word and indicates the topic of the discussion. Through the hashtags, you can search for a specific topic and join the conversation.

Although it might seem difficult to find a way through which restaurants can use Twitter effectively, I assure you that once you’ve got its simple philosophy you will be able attract customers into your restaurant through this powerful social media marketing tool.

Tweets spread and engage easily. Not exploiting this powerful social platform to promote your restaurant would be unforgivable mistake. In fact, food is one of the most talked-about topics on this network. Here, people look for inspiration, advice about restaurants, reviews, food pictures and so on.

Every year, Twitter organises the #RestaurantWeek to explore the world’s tweets about food. In 2014, Twitter conducted research in the UK which shows how people not only love eating out, but also share these experiences.

Besides, if you conduct research using the hashtag #FoodFriday you will see thousand of restaurateurs, chefs and foodies exchanging tips and recipes in confirmation of the Twitter research. Also, search for @TwitterFood, an account that collect all the news and events about food.

For users Twitter is a place where they can discover new places to dine out at and let others know what they are eating. For restaurants, it’s a way to engage prospects by sharing their creations and services.

How managers can use Twitter for restaurants in 5 steps

The following are the 5 steps for effective Twitter restaurant marketing. At the bottom of the page you will find the 20 best tools to make the most of this social network.

Like any other communication channel, you should gauge your budget and available time. Before churning out tweets, it is crucial to have a clear Twitter marketing plan. Make sure you’ve do the following:

Your image represents your brand to the followers’ eyes. It is important that your Twitter profile is consistent with your brand identity. Once you’ve created an account, choose a profile and cover image, and a bio that best represents you. Don’t try to be someone else, be yourself and always show consistency to your prospects.

The communication on Twitter is in real time, but preparing a good plan for your content in advance is crucial to boost the performance of your profile. Create an editorial plan to schedule what topic you will cover during the week.

You may wonder how many tweets you should publish every day, but unfortunately it is not an exact science – it depends on your activity and target.

Bear in mind that Twitter is an open conversation space. Don’t pester users with thousands of commercial messages. The following is an example of how you may arrange your tweets in a day:

Morning: share something about your restaurant behind the scenes.

Lunch time: when people start to get hungry, share your recipes and main courses.

Finally, plan a series of special discounts for your followers through the weeks. This will drastically aid the engagement process.

Besides the chance to exploit the infinite power of Twitter without additional costs, you should also consider promoting your content. In fact, there are the so-called “promoted products” which allow you to spread your content beyond your followers and reach your main targets.

If you are looking for inspiration, search on Twitter for the following restaurants and learn how they are engaging thousands of customers.

This is an American restaurant chain specializing in Mexican food. On Twitter, they rely on humorous conversation based on images. Followers get many discounts and timely assistance.

This is an Italian restaurant chain in Spain. They use Twitter to discuss Italian traditions and recipes. Every week customers can get special discounts. 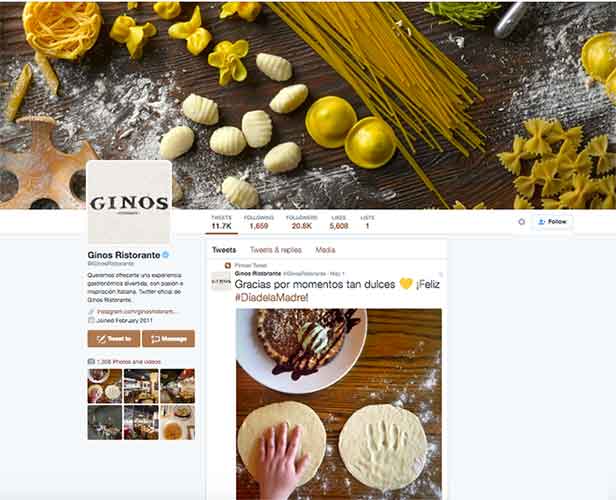 The first cupcake shop in America. On Twitter, they share recipes, anecdotes and images of their delicacies. A partially free tool that shows data about followers, the most effective times to post, users who are most engaged with your account, interactions and much more.

This is probably the most known and effective tool for super professional management of your Twitter channels. You can download it on your PC or Mac, and also use it as Chrome Add-On.

You can build customized news feeds, monitor your account, observe trends, and program the tweets. It is a must-have tool for those who want use Twitter for restaurant marketing effectively.

Who are the most influential users in a certain area? From which cities do your followers come? This is a really useful tool for conducting a detailed analysis of your followers.

This allows you to deeply analyse your Twitter followers and express them through effective pie charts. It’s one of the most useful tools to learn from the data of your Twitter for your restaurant.

This tool allows you to schedule tweets, but mainly monitors the performance of hashtags tweeting at different times the same content with different hashtags.

If you have a particular interest and a strong eagerness for understanding precisely in which moments it is advisable to tweet and what, Tweriod is the answer!

No analysis or statistics. Here is a series of covers and amazing background for your Twitter profile ordered by category.

This shows the published tweets with a particular keyword.

No one can hide hashtags, keywords and even web addresses on Twitter, thanks to Keyhole.

The free version allows you to receive alerts for each hashtag you’ve saved. It’s a sort of Google Alerts for queries on Twitter.

Don’t know what a hashtag means? This tool gives you the definition of the various hashtags that people use.

This is an add-on for Google Chrome and other browsers which quickly displays useful information on any Twitter account.

If you don’t want to get lost among a thousand features and statistics, and all you need is to schedule your tweets, Twuffer is the answer. It is totally free.

If you don’t have any time to share in real time on Twitter what you’ve just taken out from the oven like bread or cakes, this tool does it. It tweets to the world that your croissants, pizza, bread and cakes are hot and freshly baked.

The problem of fake users on Twitter (and on social networks in general) is annoying. Through this you can spot your fake followers as well as the ones of competitors.

This allows you to analyse in real time all new tweets related to a specific hashtag.

Hootsuite provides multi-platform management of social accounts, which is not limited to Twitter but also includes LinkedIn, Facebook, Google Plus and Foursquare.

Once you’ve connected this tool to Twitter, it allows you to quickly create an infographic that compares two accounts.

This is the official tool released by Twitter. It allows you to explore the interests and demographics of your followers.

Are you successfully using Twitter for a restaurant? Do you want to add some tips to help other restaurateurs attract more customers on Twitter? Use the comment box below and share your comments with us.